The Corporate Governance & Board Leadership Masterclass is focused on publicly traded and private companies, the core responsibilities, issues and dilemmas that the Board of Directors of large corporations are faced with. The purpose of the Masterclass is to bring the frontier of corporate governance and board leadership practices to chairs, directors and C-suite executives, thereby enhancing these practices and value creation in an ever-changing business landscape.

The Board Leadership Masterclass is developed in close collaboration with leading chairs and key players from the top of the Indian corporate world. The curriculum is built around 17 challenging situations facing the chairman and the board, presented in case stories based on real life events.

Why You Should Attend?

2.    Decisions only the board must make:

- The role of committees

- Delegating to the management team

Boards can take help from anyone, but they only should finally make them, and they should be accountable for them.

3.    Directors to be on the cutting edge of relevant information and knowledge.  Need for independent information.

4.    Board and management partnership and board independence at the same time.

8.    Board’s future composition and board leadership.

10. Beyond compliance. Reorganizing the work of the board. Time allocation.  Board evaluation tools. 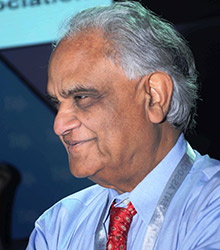 Dr Ram Charan is a world-renowned business advisor, author and speaker who has spent the past 35 years working with many top companies, CEOs, and boards of our time. In his work with companies including GE, Bank of America, Novartis, Verizon, Aditya Birla Group, Tata Group, Max Group, Yildiz Holdings, UST Global, Fast Retailing (Uniqlo), Longfor and two of the four largest digital companies in China, he is known for cutting through the complexity of running a business in today’s fast changing environment to uncover the core business problem. His real-world solutions, shared with millions through his books and articles in top business publications, have been praised for being practical, relevant and highly actionable — the kind of advice you can use Monday morning.

Former Chairman of GE Jack Welch says Ram “has the rare ability to distill meaningful from meaningless and transfer it in a quiet, effective way without destroying confidences,” while Ivan Seidenberg, the former CEO of Verizon, calls Ram his “secret weapon.”

Ram has coached more than a dozen leaders who went on to become CEOs, and has served on the boards of Hindalco in India, Emaar, Austin Industries, Tyco Electronics, and Fischer and Porter. His newest book, Talent Wins, co-authored with Dominic Barton and Dennis Carey (Harvard Business Review Press, March 2018), is a guide to radically rethinking the management of talent, because human capability is the ultimate determinant of a company’s success. Especially in this digital age.

Ram has authored over 25 books since 1998 that have sold over 2 million copies in more than a dozen languages. Three of his books were Wall Street Journal bestsellers, including Execution, which he co-authored with former Honeywell CEO Larry Bossidy in 2002, which spent more than 150 weeks on the New York Times bestseller list. He also has written for publications including Harvard Business Review, Fortune, BusinessWeek, Time, Chief Executive and USA TODAY.

Want to be part of it?

VCC Events opens up the avenues for participation. Join hands to be a part of India’s largest gathering of alternative investments leaders, industry stakeholders and Asia’s influential limited partners, general partners and marquee advisors. Your chance to actively participate and augment yourself as thought leaders.

Attend as a delegate

Do you have any queries?

Wish you to be an Expert? or a training need? Drop us a line and we will call you.

Valuation and Fundraising for Tech Startups

Valuation and Fundraising for Tech Startups